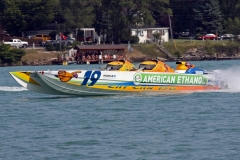 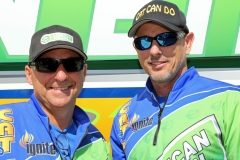 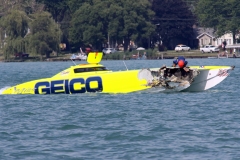 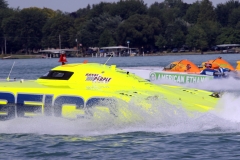 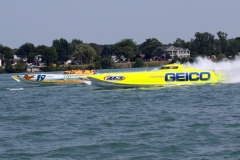 Keith Holmes, the owner of the American Ethanol/Cat Can Do powerboat, was killed during last Sunday’s race St. Clair Michigan OPA Offshore Race after a collision with the Miss Geico boat in an Offshore Powerboat Association event — the Michigan City event is a Superheat International race, but those boats race for both organizations.

A second man, Jamie Sartin, was listed in critical condition as a result of the crash. Sartin was driving the Cat Can Do boat, while Holmes was on throttles.

‘Our condolences go out to, not only the families, but the whole race community’, said Jack Arnett, executive director of the La Porte County Convention & Visitors Bureau, which puts on the event in conjunction with SBI.

Local photographer Paul Kemiel — who also serves as a correspondent for The News-Dispatch and Powerboat Racing World was on hand in St. Clair on Sunday.

Kemiel has photographed powerboat races for 36 years, and he had a personal, 30-year relationship with Holmes, both as a customer and also as a friend.

‘Every time I saw him, we always checked in and it was like we had just talked yesterday. He always had a smile on his face, I never saw him being cross … he was definitely a true benefit to the sport of offshore powerboat racing. He’s gonna be missed. He was one of the best in the business’.

In fact, Kemiel and Holmes spoke together last Sunday, not long before the start of the fateful race.

‘He said, ‘We’re gonna put on a show for you.’
That was the last thing I heard him say’.

Kemiel also wished to express his condolences to the Holmes family and the American Ethanol/Cat Can Do team.

Cox said that a reverend who travels with SBI will be on hand during drivers’ meetings to speak and offer comfort to the racers.

Paul Kemiel, from Michigan City, Indiana USA ,is a professional powerboat racing photographer with a career than has spanned 36 years. Paul focuses his Canon camera and lenses on Formula One tunnel boats, Offshore, and Unlimited Hydroplanes. Kemiel’s work has been published internationally in 15 countries. Paul is our USA representative for Powerboat Racing World, in helping supply photos of his USA racing coverage.

More from OPAMore posts in OPA »
Please support this website by adding us to your whitelist in your ad blocker. Ads are what helps us bring you premium content! Thank you!