The winner to Torquay, A69 – Cougar driven by Richard Carr and Steve Curtis broke a power steering belt on the race back a to Cowes

Silverline also snapped a power steering belt on one engine on the run to Torquay, hasty repairs were carried out in the West Country which proved to be fruitful – Drew Langdon and Miles Jennings led from start to finish in their Outerlimits hull on the race back to Cowes.

However, it was Dobson and Sheppard in Halcyon Connect that won the race overall with an elapsed time of 2 hours 35 minutes and 58 seconds in their Ilmor powered Dragon hull.

In the third, the first overseas entry over the line was Hibernia from Southern Ireland, (John Ryan, Phillip Fitzgibbon, Denis Dillon and Glenn Chidzoy) with an average speed of 75.09 mph. 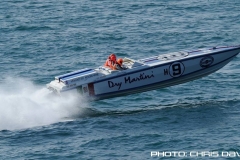 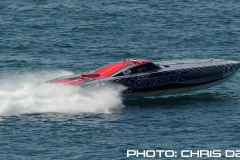 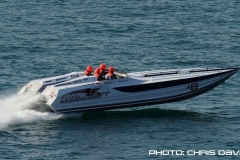 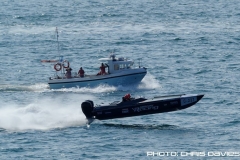 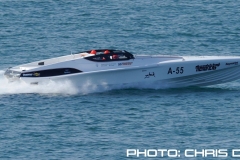 John raced Offshore UIM Class 3 in the 1980’s & 1990’s. He served as the Cowes Torquay Cowes Event Director for 4 years, including running the 50 th Anniversary Event in 2010. He has recently organised 4 British Offshore races under UKOPRA sanction. He is the Editor of Powerboat Racing World.

More from UIM MarathonMore posts in UIM Marathon »
Please support this website by adding us to your whitelist in your ad blocker. Ads are what helps us bring you premium content! Thank you!